Previous blog posts on modern monetary theory (MMT) and helicopter money have led to the following interview with John Adams and Martin North of Digital Finance Analytics, shown on the YouTube channel In The Interests of The People:

The comments following this interview indicate significant misunderstanding about economics in general and economic theories such as MMT in particular.  It is worthwhile responding to some of these misinformed comments.

The first general point is that money, conceptually and operationally, is almost never taught in standard university courses.  The general population and most economics graduates have few clues about money, which make them easy victims of “money illusion” and “money disorder”.

The second general point is that economic theories, including MMT, never attempt to be accurate descriptions of the real world.  A past president of the Eastern Economic Association, Barbara Bergmann (2009) chided her fellow economists:

Members of the economics profession create economic theory that is neither inspired nor validated by observation. We create theory by sitting in a chair and just…making it up. If you are a theorist, you know perfectly well that that is what you do.

This way of developing economic theory means that all economic theories are prone to fallacies contradicted by observations.  These two general points suggest that monetary theories made up by academic economists (and even central bankers) should be treated with a great deal of caution.  This is particularly true about the monetary theory in the imaginary world described by MMT.

For example, one comment asserts, “MMT is not a set of policy proposals; it is a description of how our monetary and fiscal system currently functions.”  This statement is false, because MMT describes how a fictitious system functions.

MMT gained credibility by pointing out many erroneous explanations by politicians for the need to be fiscally responsible.  These strawmen built from economically unqualified public figures are much easier to knock down than the more informed criticisms by many professional economists, which are quite plentiful and accessible, but ignored by MMT economists.

How often have MMT economists asserted that “the government spends money into existence” or “the government creates money as it spends”?  This is not the world we live in, because governments do not create money, only central banks are allowed to create money.  For deficit spending, the government has to issue and sell Treasury bonds to the public to raise the funds.  Only when the public demand is insufficient would the central bank print money to buy those bonds from the primary dealers.  Buying bonds directly from the Treasury by the central bank with printed money is normally forbidden by law because it is direct “government debt monetization”.  Purchase of Treasuries through quantitative easing (QE) is indirect government debt monetization.

The separation of the two functions – creating money by the central bank and spending money by the government – was deliberately introduced to provide monetary discipline.  MMT ignores this reality and simply asserts that central banks are not independent from their governments.  This is like saying all branches of government always act as one, which is false.

MMT, helicopter money and QE are essentially the same idea of using the freedom of fiat currency creation to solve economic problems.  The only difference between them is how the money is spent to solve different perceived problems such as unemployment, wealth distribution, economic growth, etc.  The common motivation and the overall effect are to create Keynesian demand by government spending using fiat currency creation to transfer real resources for consumption.  Idle labour is assumed to be involuntary unemployment, which is attributed to the fault of the economic system and not to the decisions of individuals.  Monetary socialism is where the government uses the control of its fiat currency to allocate resources and to manage the economy.

However, money is not capital; money is only an illusion of capital until money successfully makes a claim on capital, which is the means of production.  Money only has an impact on the real economy when it is redeemed for capital and when the resources are used for production or consumption – which is at least a two-step process.  Money may have no positive impact on the economy if money cannot be adequately redeemed for capital (e.g. due to inflation) or if the redeemed capital is misspent.  Economic theories like MMT have no conception that money could be “misspent”.

These are the main reasons why the manipulation of money cannot always, if ever, benefit the real economy; this is the notion of ineffectiveness behind the “neutrality of money” in classical economics.  Money under a fiat currency system is actually not neutral; as evident from recent data since the global financial crisis (GFC), money manipulation has actually caused harm.  The money created has often been misspent and caused “money disorder”.  One of the causes of this uncertain efficacy of monetary stimulus is that the temporal relationship between great increases in the money supply and the appearance of inflation may be characterized by unpredictable lags.

Keynesian demand stimulus through government deficit spending to reach full employment and maximum economic growth has been applied for decades and never worked well according to empirical data. Apart from a brief hiatus of Clinton surpluses in the late 1990s, the US government budget deficit relative to GDP, has trended larger, reaching over 11 percent in the GFC and has never been less than four percent since.  The half-century trend of increasing government budget deficits has been accompanied by a decreasing trend in economic growth, as the chart below shows. 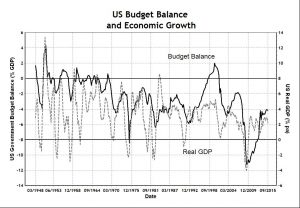 Fiat currency creation or “printing money” to finance government spending is so easy to do that it has been done many times since paper money was first invented in China more than fifteen centuries ago.  Of course, it has always led to “money disorder” and typically hyperinflation in many countries, causing the schemes to be abandoned eventually.

Contemporary examples of the failure of MMT include Zimbabwe, Venezuela and Argentina. The main reason for the failure of MMT in these sovereign states is their need to borrow in foreign currencies because they typically transact with trading partners in US dollars and not in their own fiat currencies.  Printing money in their sovereign currencies has stimulated domestic demand, but domestic supply has been unable to meet the demand, particularly with specialization in production under globalization.  Persistent trade balance disequilibrium contradicts the equilibrium assumption of standard economic theory where supply equals demand.

Hence the disequilibrium from deficient domestic supply was remedied by imported supply from foreign countries, resulting in chronic trade deficits, current account deficits and mountains of foreign debt.  Printing domestic fiat currencies to meet financial obligations in foreign currencies led eventually to the destruction of the domestic currency and hyperinflation.

MMT economists ignore these glaring counter-examples with dismissive explanations about “corruption” or “social engineering” in other countries, probably because the MMT economists are unfamiliar with what has been happening in America.  The US is exceptional because the US dollar is the global reserve currency which is enforced by the mightiest war machine, used frequently for “regime change” of countries which question accepting the “exorbitant privilege” of the US dollar.

Many decades of US trade deficits and current account deficits have created a mountain of debt to foreigners, but they are mostly in US dollars.  MMT is right that there is absolutely no problem with this mountain of debt because the US can easily print US dollars to pay down this debt.  Therefore, this debt represents mostly a history of “free” goods and services provided by foreign countries, particularly by China, to the US.  The foreign debt and repayment in nominal US dollar has rapidly diminished purchasing power for foreign creditors due to inflation and there are fewer choices of US goods for purchase due to a decline in US manufacturing industries.

Many countries are waking up to the inflationary implications of large quantities of US dollars.  They are increasingly looking for alternative ways to hold their foreign currency reserves.  Alternatives to the US dollar are increasingly being used to settle international transactions between non-US countries such as through currency swaps, mainly to avoid being held hostage to US sanctions.  For example, INSTEX is a new trading platform between the European Union (EU) and Iran to by-pass US dollar payment systems such as SWIFT.

Under a de facto demotion of the US dollar as the global reserve currency, US trade deficits and current account deficits are beginning to matter due to a greater reluctance of trading partners to hold large US dollar foreign exchange reserves.

The US is becoming more like many other countries with persistent trade deficits, when their fiat currencies which can be created without constraint, may become less and less acceptable for balance of payments settlements.  This explains the recent trade wars between the US and other countries, particularly China (its largest foreign creditor), in order to curb US trade deficits by setting and raising tariffs.  Trump has also recently suggested playing the "big currency manipulation game" by devaluing the US dollar.  MMT would treat such developments as “irrational” or as the “political engineering” of an unstable President.

Judging by the mountains of debt in most countries, it is likely that MMT and monetary socialism are, to a greater or lesser extent, de facto economic policy nearly everywhere. The enormous supply and demand imbalances observed globally are evidence that the fiat currency system advocated by MMT is neither new nor sound monetary policy.  MMT would consider as bizarre any talk of abandoning the fiat currency system and bringing back the gold standard in some form to discipline money creation.  A fiat currency system has not created national prosperity and it has led to international economic instability.

Should a US socialist such as Bernie Sanders ever become president then MMT is likely to become overt government policy, and the US economy will accelerate its collapse into a Keynesian black hole.

This entry was posted in Econoclasm, Economics and tagged MMT, money. Bookmark the permalink.