Monetary policy of central banks has only two possible consequences: stagflation or price stability.  The arguments for this radical hypothesis are presented in this post.  Stagflation is defined as a disequilibrium process of generally rising prices (various measures) coupled with falling economic growth (real GDP).  Stagflation is not recognized or studied in conventional equilibrium economics, but dismissed as temporary exogenous shock.  We consider stagflation as a disequilibrium and endogenous process driven by policy.

Central bankers often confuse stable inflation with price stability.  They think that their policy of controlled perpetual inflation has stimulated economic growth toward optimal equilibrium.  Actually, their policy has produced exactly the opposite result – falling long-run economic growth.   Their inflationary policy has actually caused a disequilibrium process of slow but persistent stagflation.   Decades of stagflation have not been recognized as fact because economics is not science and economists suffer from cognitive impairment caused by their theoretical blinkers.

Due to the financial sector interrupting the flow of money supply to the economy, monetary policy has lagged impact on real economic activities.  Enormous monetary expansion (printing money aka QE) following the global financial crisis (GFC) has inflated asset prices of all types, because the financial sector has acted as a liquidity trap, retaining the money for financial speculation.   Money supply has not flowed smoothly to the real economy, only in fits and starts, leading to alternate periods of sluggish and vigorous inflation in producer and consumer prices.

If inflation is indeed a monetary policy phenomenon, then sooner or later surges in consumer prices should be expected.  If this occurs before any evidence of an economic boom of high growth, then and only then would economists consider the prospect of stagflation (Greenspan, 2018).  We may be reaching that stage as some recent data are suggesting.  The possibility of accelerating US consumer price inflation is suggested in the following chart:

At the same time, there is little evidence that, after the GFC, we are about to escape an era of lacklustre economic growth, which has been called “secular stagnation” (Summers, 2015).  Even worse, judging by yield curve flattening as a reliable of predictor of recessions, we may be entering a period of economic slump, as the following chart shows. 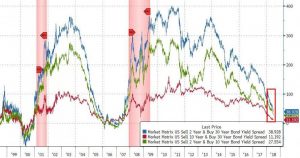 If economic conditions develop where stagflation is widely recognized, then the Keynesian policy of demand stimulation and inflation may be discredited once again.  In the long run, not everyone is dead; some are still alive to face the music.  The correct long-run policy should be the goal of price stability, recognized long ago as appropriate (see below) and acknowledged occasionally even today.  However, economists mostly believe in the “neutrality of money” or that a little inflation is harmless or even helpful.  Therefore, the importance of price stability has not had sufficient theoretical or empirical backing from conventional economics.  The policy of price stability was too easily corrupted and has effectively been abandoned as the following brief history shows.

Decades ago, the US Federal Reserve took its mission of “price stability” seriously for the sake of long-term stability, as William McChesney Martin (1957) said:

Creeping inflation is neither a rational nor a realistic alternative to stability of the general price level.

Experience over the centuries has demonstrated that there is no tolerable alternative to adequate fiscal and monetary policies, operating in an environment of open, competitive markets under our system of human freedoms. Neither an economic dictatorship nor complacent acceptance of creeping inflation is a rational or tolerable way of life for the American people.

There is no panacea, no magical means of assuring orderly economic growth, nor are we much more likely in the future than in the past to achieve perfect performance in the timing and execution of policy and action.

Emphasis has been added here.  There was no belief in magic then like there is today.

For several years, including those of the Kennedy presidency, under the auspices of responsible monetary policy in the US, consumer price inflation was suppressed from over three percent to just above one percent per annum and the economy benefited from years of high annual economic growth exceeding four percent.  These economic conditions were interrupted by the Vietnam War which caused rising inflation, falling US dollar and pressures on the gold standard.  Abandonment of the gold standard by Richard Nixon in August 1971 released any constraint on money creation and unleashed inflation.

After a wild decade of high and volatile inflation in the 1970s, inflation was brought back under control in the subsequent decades, but never reached the one percent level until 1998, and only briefly, during the last years of the Clinton presidency.  Price stability was actually a myth, often talked about but never pursued.

Living for many years with significant inflation has desensitized economists to rising general prices.  No longer is it considered that “Creeping inflation is neither a rational nor a realistic alternative to stability of the general price level.”  Instead of stable prices, creeping inflation has become official monetary policy, as US Federal Reserve Chair Janet Yellen said on Nov. 14, 2013:

Congress has entrusted the Federal Reserve with great responsibilities. Its decisions affect the well-being of every American and the strength and prosperity of our nation. That prosperity depends most, of course, on the productiveness and enterprise of the American people, but the Federal Reserve plays a role too, promoting conditions that foster maximum employment, low and stable inflation, and a safe and sound financial system.

Emphasis has been added.  After the GFC, consumer price inflation dropped well below one percent and for several years it never exceeded two percent per annum, despite an historic level of monetary stimulus.  The lacklustre recovery called “secular stagnation” (Summers, 2015) was identified as a problem of lack of inflation – “lowflation” (Lagarde, 2013; Moghadam et al., 2014).  This diagnosis led to the monetary policy of “inflation targeting” as a necessity for stronger economic growth.  This is a policy blunder because inflation is theft and theft is no magic.

Contrary to current economic theories, which are discussed in a separate research paper (see below), creeping inflation is not harmless, but harmful, as stated by William McChesney Martin (1957), the famous non-economist.  As shown here, the empirical evidence is: inflation ultimately causes economic stagnation – exactly opposite to current assumptions.

Using US data from the Bureau of Economic Analysis (BEA), with inflation measured by consumer price index (CPI) and economic growth measured by the real GDP (gross domestic product), the quarterly statistical relationship between CPI and real GDP, shown in the figure below.  The relationship is quite noisy, because there are many factors affecting the actual measurements of prices and economic growth. 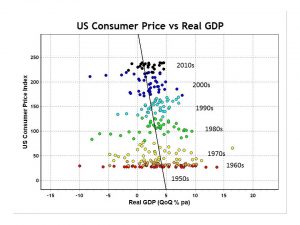 Inflation encourages consumption over saving and investment, while deflation does the reverse; neither is sound.  Price stability achieves the perfect balance to produce the optimal aggregate consumption for economic growth.  Instead of price stability, decades of inflationary policy have achieved decades of stagflation - this has been foreseen by William McChesney Martin.

Martin’s 1957 speech to the Committee on Finance of the United States Senate is well worth reading in its entirety.  He ended his speech with a chilling prophecy which is apparently coming true:

No greater tragedy, short of war, could befall the free world than to have our country surrender to the easy delusion that a little inflation, year after year, is either inevitable or tolerable. For that way lies ultimate economic chaos and incalculable human suffering that would undermine faith in the institutions of free men.

Emphasis has been added.  The significance of the monetary discipline expressed by Martin is analyzed in the context of existing macroeconomics in a separate research paper, which provides some needed theoretical and empirical backing for the Martin-advocated policy of price stability.  The hypothesis is that optimal economic growth occurs at stable prices.

This entry was posted in Economics and tagged inflation, stagflation, stagnation. Bookmark the permalink.

1 Response to Stagflation or Price Stability