Over-consumption is not in the Keynesian lexicon. More consumption is assumed always to be better for economic growth (with few exceptions) in a Keynesian prescription of perpetual demand-stimulation policy of quasi-boom (Keynes, 1936, p. 322):

Thus the remedy for the boom is not a higher rate of interest but a lower rate of interest! For that may enable the so-called boom to last. The right remedy for the trade cycle is not to be found in abolishing booms, and thus keeping us permanently in a semi-slump; but in abolishing slumps and thus keep us permanently in a quasi-boom.

In his theory, Keynes was guided by a central idea – “an axiom which only half-wits could question” – which Hayek (1983) explained was “that general employment was always positively correlated with the aggregate demand for consumer goods.”  As Keynes (1936, p.104) stated:

Consumption – to repeat the obvious – is the sole end and object of all economic activity. Opportunities for employment are necessarily limited by the extent of aggregate demand.

For decades, the Keynesian policy of consumption stimulation has been followed consistently in many countries, particularly the US (see below).  Specially in the current economic slump, the government policy has been to encourage more spending – a Keynesian prescription which is frequently, widely and approvingly repeated by central bankers (Dudley, 2014; Yellen, 2014), academics (Krugman, 2014) and journalists (Coy, 2014). The main public debate is about how effective the various government policies have been to induce more private spending.

In the shadow of the Great Depression, few would deny the possible existence of under-consumption or doubt the Keynesian intuition that consumption may stimulate investment and economic growth (Skousen, 1992, pp.19-21). The government can increase aggregate consumption either directly through government spending, or indirectly through its policies on taxation, interest rates, business and consumer regulation, to induce private spending. Decades of demand-stimulation by US government policy have succeeded in creating a secular trend of ever increasing aggregate consumption propensity. Personal consumption expenditure alone went from a low of 59 percent of GDP in 1951 to a high of 69 percent in 2011. 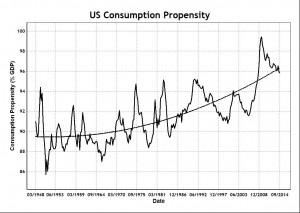 Consumption refers here to the aggregation of private consumption, public consumption, consumption of fixed capital and net consumption of imports from the external sector using published data from the Bureau of Economic Analysis (BEA, 2014) for the US economy. The trend line is computed from least-squares fitting with a quadratic polynomial.

It is irrelevant for our purpose here to discuss issues such as inflation, employment, government fiscal and monetary policy and how they all interact and cause the secular trend rise in US consumption propensity. All that matters here is to have established the empirical fact that US government policy has been highly successful in executing the Keynesian prescription of demand stimulation to cause increasing consumption.

The Keynesian assumption is that increased consumption will eventually lead to increased investment and the establishment of a new equilibrium with increased economic growth, through the effects of the Keynesian multiplier (see below).  The above data suggest US economic disequilibrium has an unsustainable trend, as indicated in an earlier post. Contrary to Keynesian expectations, the rising consumption propensity in the US economy has been accompanied by a secular decline in economic growth for more than forty years (Sy, 2014). The decline would have been steeper and more obvious had it not been for the continual injection of exogenous capital into the US economic flow (Sy, 2014c). 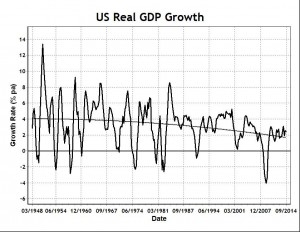 This Keynesian paradox is the conundrum of how the consumption demand-stimulation theory of economic growth can be reconciled with the above observation that ever rising propensity to consume has been accompanied by a secular decline in economic growth. To resolve this paradox, a single-sector macroeconomic model in disequilibrium, with saving withdrawal and injection, has been developed in a new research paper. In this model, the economic growth rate

has been derived from accounting identities and is given by

All variables are time dependent,

is the investment multiplier, c is the propensity to consume and s is the propensity to save, which is a rate in the flow equation but is related to the stock of saving.   It is the intervention by the government through fiscal and monetary policies which directly or indirectly determines the exogenous component of national income flow which causes the observed disequilibrium.

In the previous post, it was suggested that, due to US over-consumption, Keynesian economic collapse would have occurred during the global financial crisis had it not been for more saving and new credit injection into US economic flow to augment national income. The suggestion of over-consumption is proved here by deriving empirically a formula for economic growth as a function of the consumption propensity.

The above growth rate equation can be used to calculate empirically the investment multiplier as a function of the propensity to consume. 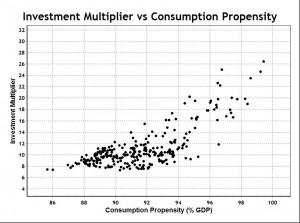 The above empirical evidence supports the Keynesian intuition that increasing consumption does indeed stimulate the economic multiplier effect of investment, because the investment multiplier appears to increase monotonically with the consumption propensity.    But the functional dependence is not consistent with Keynesian theory which states (Keynes, 1936, p.115):

Economic growth dependence on consumption can be estimated by modelling

as a power function of c with

where the parameter lambda is dependent on many other factors affecting the investment environment, which include factors such as, for example, profit opportunity, technology, regulation and availability of credit. A regression analysis of the model (Sy, 2015, Appendix A) shows the values that lead to the best least squares approximation to the actual data are

As far as we know the US investment multiplier has been computed empirically for the first time here and evidently it ranges historically between 8 and 26, but mostly between 10 and 12. The spikes correspond to economic slumps when the propensity to invest typically fell harder than the economic growth rate.  The details and implications may be discussed elsewhere.

For a given saving injection into the economic flow, the model investment multiplier can be used to calculate the nominal economic growth rate using the above equation. The model growth rate as a function of the consumption propensity has been calculated for two values of saving injection: (s = 0) and (s = -0.02), corresponding respectively to equilibrium (with no injection) and to a two percent GDP annual capital injection into the economy. 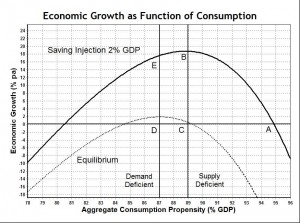 Historically, the US economy has operated to the right side of the diagram, with the trend consumption propensity increasing from 90 percent to 96 percent (see the first figure above), with trend saving injection increasing from -1 percent (saving withdrawal) to 4 percent, directly to stimulate the economy (Sy, 2015).

Keynesian policy has pushed the US economy further and further into the region of supply deficiency or over-consumption where production from net investment has been insufficient to supply the goods and services needed to meet the level of consumption demand. Demand stimulation has been counter-productive in the regime of over-consumption. The split between consumption and investment in the current US economy is 96/4, which is far from the empirical optimal split of 88/12.

The left part of the diagram to the left of the vertical lines is the region of demand deficiency or under-consumption where the level of consumption demand for goods and services is insufficient to absorb or stimulate the supply of production from net investment. This is an empirical validation of the Keynesian intuition of under-consumption conceived in the shadow of the Great Depression.

The Keynesian paradox has been resolved by showing empirically the existence of an optimal level for the consumption propensity, which implies the existence of regimes of under-consumption and over-consumption. These distinct regimes of demand deficiency and supply deficiency are also important in resolving the long-running controversy between the supply-side Say’s Law and the demand-side Keynesian theories.

Evidently, the Great Recession which followed from the global financial crisis could not have come from demand deficiency, as the US economy was already in the over-consumption regime. Further demand-stimulation applied in recent years has exacerbated the problem of supply deficiency; it has hindered endogenous growth in the US economy and has exacted enormous costs in wealth consumption and in growing national debt. Instead, US government policy should be directed at re-balancing the supply and demand structure of the economy by increasing the ratio of real net investment to consumption. This is the policy prescription required to avoid the Keynesian economic collapse.