Claims to be Science

The claim that economics is a science is often based on erroneous definitions of science: “science is what scientists do” or “science is the discovery of universal laws”. This has led to an imitation of physics in both appearance and epistemology (Mirowski, 1989). The contemporary economic paradigm has a formal theory of general equilibrium with clearly articulated axioms, mathematical models for applications, systematic data collection and advanced statistical analysis of empirical evidence.

Despite its similar appearance to modern physics and the existence of many “laws”, economics is both “scientistic” and a ”pretence of knowledge” (Hayek, 1952, p.24; 1974). Economics is not a science. This assertion requires a precise definition of “what is science”.

In a Harvard textbook, Mankiw (2009, p.22) introduces economics by stating:

But textbook economic theories have not been sufficiently tested with, or supported by, data as required by science. Academic economists have no difficulties teaching things which may not be true.

Science is defined as the body of knowledge obtained through the scientific method, which consists of iterative applications of deductive and inductive methods to achieve consistency between theory and observation. The scientific method as an epistemological process is illustrated in the figure below (Sy, 2008). 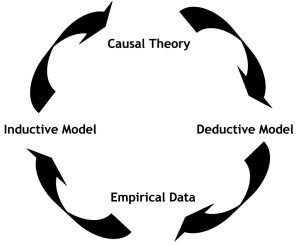 Most of economic knowledge has not been obtained from a genuine application of the scientific method. It is through many iterative loops of application that a science, such as physics, arrives at a stable theory which is consistent with observations and is then considered as core knowledge to be put in textbooks. The laws in natural sciences are well tested to be consistent with observations.

Economic “laws” are actually assumptions or hypotheses which often contradict facts of observation. For centuries, economists built elaborate theories from intuition based on those “laws” before there were sufficient systematic observation data to test those laws and their intuition. This historical tradition of untested theorizing persists to today, with few major economic theories (including Keynesian theories) having passed serious empirical tests. As Bergmann (2009) noted, “observation-less theorizing” is still “the leading activity of economists”.

But the reason that economics is not a science is due to the lack of iterative interaction between the theoretical plane and the empirical plane in the act of creation (Koestler, 1964) of economic knowledge. The two planes rarely intersected to create true scientific knowledge in economics. Most economic theories have been rhetorical arguments (McCloskey, 1998) about economic issues without any intention of checking whether their conclusions agree with the facts of observation. Their propositions are often vague and verbose, based on unclear or untestable assumptions which are often not even stated; the situation persisted due to historical custom, until the advent of formal theory.

The formal theoretical foundation of the neoclassical economic paradigm allows its assumptions and its deductive propositions to be more easily tested against observations. This is an important advantage of formal theory in science.  But as the greatest theorist of all time (Einstein, 1934) noted:

Pure logical thinking can give us no knowledge whatsoever of the world of experience; all knowledge about reality begins with experience and terminates in it.

Unfortunately, even the most casual stylized observations and statistical analysis have refuted some of the core assumptions of the formal theory (Arrow and Debreu, 1954). And the scientific falsification has not led to significant revision of the theory, due perhaps to the management of economic research to protect the status quo (Blaug, 1998).

Empirical research in econometric studies has largely used economic data to develop more advanced techniques in mathematical statistics, without contributing much of substance to economic theory, creating a “scientific illusion of empirical macroeconomics” (Summers, 1991). Econometrics appears to have made a profession-wide methodological assumption that it is possible to discover objective “scientific” laws of economics, much like what observational data did for astronomy centuries ago. The approach has led to empirical relationships, including the Phillips Curve (Phillips, 1958), which are of doubtful significance (Swann, 2012).

Despite having the essential elements of a science, economics is not a science, because economic theory and empirical data exist in parallel, non-intersecting universes.  As Kaldor (1972) noted:

In economics, observations which contradict the basic hypotheses of prevailing theory are generally ignored: the "theorist" and the "empiricist" operate in two isolated compartments and the challenge of anomalous observations is ignored by the theorist-as something that could be taken into account at the stage of "second approximation" without affecting the basic hypotheses.

In an imitation of physics, economic research papers are not motivated directly by new significant economic questions, but are motivated by wanting to make incremental contributions to existing published papers. Creating more complicated mathematical versions of existing unscientific models is often mistaken for theoretical progress.  This practice entrenches the divide between economic theory and empirical evidence by separating the two areas of published research.

Economics papers are written in a way which emulates physics papers, where extensive citations of past research provide the main motivation or justification for current research. This is not really appropriate for economics because, unlike physics (with a solid foundation), past topics of economic research may not have the same importance or relevance in the contemporary situation. As Alfred Marshall (1890, p. xi) said, “Economic conditions are constantly changing, and each generation looks at its own problems in its own way”. Unfortunately, contemporary economics is still solving yesterday’s problems, with old economic concepts.

The economic paradigm and its alternatives are all based on the assumption that the key questions addressed in the past, and the way they were addressed, are still the key questions and their methods are equally relevant today. This is the universal fallacy in economics which is the subject of future posts on this blog. Attempts to find universal laws, like those in physics, have failed and will never succeed to the same extent as in the natural sciences. A refusal to recognize this has resulted in a scientistic pretence of knowledge in economics (Hayek, 1974).

As well as misguided attempts to validate the universality of economic laws (e.g. the Phillips Curve), the misallocation of resources to old problems leads to the neglect of urgent new problems such as those associated with the global financial crisis. The agenda of academic research has hardly changed in the several years since the crisis, even though it was the every-day application of economic “science” to business decisions and government policies which has endogenously created past economic crises (Sy, 2012).

The revolt against science has led to such views as noted by Mayer (1934):

...introspection and "subjective" analysis must continue to be of paramount importance, that social relations are externally observable to only a very slight extent, and that, in place of and in contrast to observational, experimental, and mensurative  procedures, the chief methods of the social scientist must be imagination, psychological insight, and historical interpretation, with statistics, surveys, and case studies playing subsidiary roles.

Without science, economics has seen a resurgence of pluralism, which did not help to advance economics in the past, and will not help in the future to solve the economic problems faced by business and government. It is inconceivable how any economic decision or policy coordination is possible in democracies, or among nations, when there are no consensus principles or assumptions to guide the negotiations.

The lack of scientific consensus in managing the global financial crisis has been noted by a central banker (White, 2013): “there is, in practice, no body of scientific knowledge (evidence based beliefs) solid enough to have ensured agreement among central banks on the best way to conduct monetary policy”. Elsewhere, White (2014) stated in an interview:

People are making it up as they go along. This is hardly science – building on the pillars of the past… what they’ve been making up as they go along actually differs across central banks [The Bundesbank, for example, is fighting the threat of high inflation, whereas the Fed is more concerned about the prospect of deflation]. They can’t even agree amongst themselves about what’s the best way to do things.

Economics as a science is not a methodological choice, but a necessity if it is to be useful in the real world. Economics has not been useful because it has not been a science due to misconceptions about science. Economics can be a science once economic theories cease to be treated like physics theories or defended like religious sects (Nelson, 2001). For economic theories to be useful, economists must be prepared to modify or abandon theories as necessary according to the facts of observation.

This entry was posted in Science. Bookmark the permalink.